[The cannabinoid system and its importance in the perinatal period].

By Freedom WaresAugust 6, 2013No Comments

Home » [The cannabinoid system and its importance in the perinatal period].

[The cannabinoid system and its importance in the perinatal period].

The cannabinoid system has been recently described, including the endogenous ligands, mainly arachidonic acid derivatives, and their specific receptors. Endocannabinoids are involved in the modulation of synaptic transmission, through which they exert their psychoactive, motor and antinociceptive effects, among others; they also exert extraneural effects, mainly immunomodulation and vasodilation. Recent data suggest that the cannabinoid system might play an important role in human ontogeny and could participate in the implantation and early development of the embryo, in fetal brain development, and in the beginning of breast feeding after birth. In addition, the vasodilatory effect of cannabinoids, together with inhibition of the release of excitotoxic amino acids and cytokines, as well as modulation of oxidative stress and the toxic production of nitric oxide, justify the growing evidence pointing to a possible neuroprotective effect of cannabinoids in perinatal asphyxia. 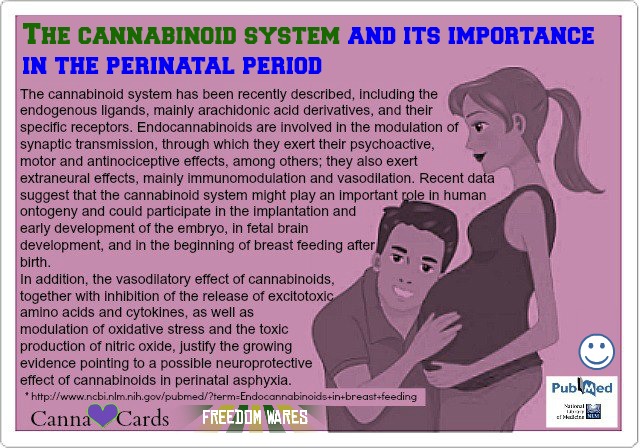