Alterations of endocannabinoids in cerebrospinal fluid of dogs with epileptic seizure disorder.

By Freedom Wares December 29, 2013 No Comments
[Epub ahead of print]

Alterations of endocannabinoids in cerebrospinal fluid of dogs with epileptic seizure disorder.

Epilepsy is one of the most common chronic neurological disorders in dogs characterized by recurrent seizures. The endocannabinoid (EC) system plays a central role in suppressing pathologic neuronal excitability and in controlling the spread of activity in an epileptic network. Endocannabinoids are released on demand and their dysregulation has been described in several pathological conditions. Recurrent seizures may lead to an adverse reorganization of the EC system and impairment of its protective effect. In the current study, we tested the hypothesis that cerebrospinal fluid (CSF) concentrations of the endocannabinoids anandamide (AEA) and 2-arachidonoyl glycerol (2AG) are altered in epileptic dogs. Concentrations of AEA and total AG (sum of 2AG and 1AG) were measured in 40 dogs with idiopathic epilepsy and in 16 unaffected, healthy control dogs using liquid chromatography combined with tandem mass spectrometry.

In conclusion, we present the first endocannabinoid measurements in canine CSF and confirm the hypothesis that the EC system is altered in canine idiopathic epilepsy. 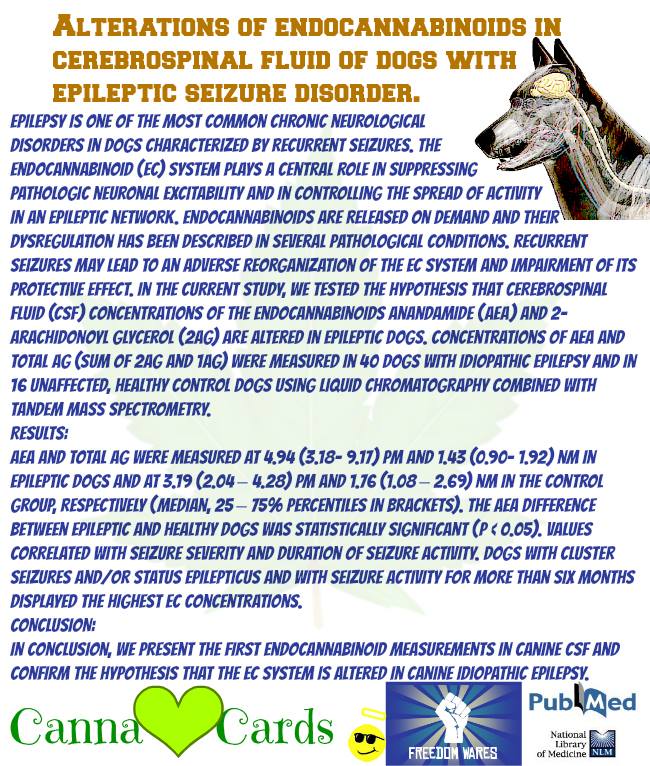